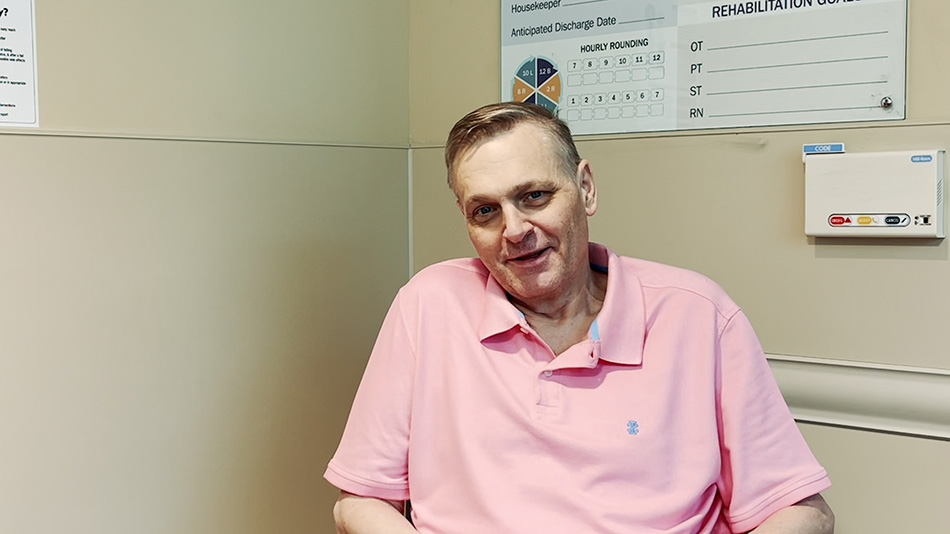 Former MountainView Hospital Rehab patient, Jody R.’s life was turned upside down when a flesh-eating bacteria caused an emergency amputation of 25 percent of his hip. MountainView Hospital’s rehab unit not only taught Jody how to stand and walk, something other facilities said he’d never be able to do again, but also give him his life back.

In March of 2021, Jody’s life took a sharp turn for the worst. He began to notice a growing pain in his leg and shoulder which caused him to be unable to stand for long periods of time and progressed into syncope; fainting. He decided to go to a local hospital and found that his blood pressure was extremely low and was quickly admitted into the ICU.

“They really couldn’t figure out what was going on with me. I did not get a good diagnosis from them,” Jody explained.

It was decided that Jody would be put into a skilled nurse facility, but this was done with no action plan.

Jody said, “I was told I’d just have to live with it with the standing up and fainting and not being able to walk really or have a normal life.”

Jody’s condition continued to worsen and five days later he was put back into the ICU. He was in extreme pain and undergoing multiple exams until a physician offered to do an exploratory surgery to hopefully see what was going on. That late-night surgery revealed that Jody had necrotizing fasciitis; an aggressive flesh-eating bacteria which had made its way down to his bone.

After the surgery, Jody was again left with no real plan for recovery and he and his wife knew that had to do something.

Jody’s wife did some research about local rehabilitation centers and decided to give MountainView Hospital’s Rehabilitation Unit a try.

“You have to understand that when I left the hospital, I was probably at the lowest point in my life. My wife had been told that I’d never walk again that I was going to be bound to a wheelchair. That they weren’t able to save enough of my leg in order for me to be able to stand,” Jody said.

Little did he and his wife know, it would only take two weeks in MountainView’s Rehabilitation Unit for Jody to be well on his way back to a normal life.

Although a painful transition into the MountainView Rehabilitation Unit could not be avoided, as soon as Jody was checked in, he noticed an immediate improvement in his care.

Jody said, “from the very first moment that I got here, it was an absolute joy and pleasure.” Jody’s care team discussed his goals with him and created a recovery plan based on those goals. His main goal; to walk again.

Jody said, “They never treated me as if they didn’t have this under control. They exuded a confidence and just professionalism and they are just generally nice people.”

And although Jody had been told previously that it was impossible, the care team at the MountainView Rehabilitation Unit had him walking again on day one.

“Ron who was my main physical therapist for the entire time that I was there and Tina who was my main occupational therapist were like ‘no, no, no, we got this.’ And so, the very first day, I stood up and it was just amazing. Thinking I was going spend the rest of my life sitting and I stood,” Jody said.

While Jody’s care team pushed him towards his goals, they also paid close attention to his needs. Jody explained, “They could tell when I was really hurting or when I was tired and when to back off we’d do more stationary exercises and things like that.”

Before Jody knew it, he was set on the road to getting back to his normal life before his illness and confidently checking out of the rehabilitation unit.

“For those that have any doubts or are wondering, this is the place to go for PT/OT rehab services, this place is world-class,” Jody said.

To learn more about Jody’s journey, watch this video: https://www.youtube.com/watch?v=fahJm-N5Z_A

5 holiday recipes to use up peak produce

December 6, 2021 by Bana Jobe
While many of us have a goal to consume in-season produce, it can be difficult to brainstorm what to make with in-season fruits and vegetables...
Previous Post

Ready to run? How to start a couch to 5k plan

November 22, 2021 by Bana Jobe
As we approach the season for "Turkey Trots" and other 5ks, some may need a bit of motivation to get back into the running or jogging groove.
Next Post
Back to blog home

COVID-19 cybersecurity: How to pay your healthcare bill online (securely)

Pulmonary hypertension and ways to support your symptoms

The Risk of UTIs Increase as You Age - Here's Why

Occupational therapy: What to know