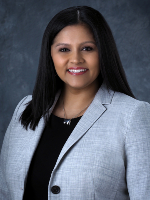 Prior to MountainView, Hiral was CEO at Lakeview Regional Medical Center in Covington, Louisiana. She was with the Tulane Health System for 14 years. Hiral started her career as an intern and rose through the ranks. Her most notable accomplishments include over $100 million in expansion and capital projects, establishing the first Comprehensive Stroke Center in Orleans Parish, and in her current role she has established the first Level II Trauma Center in St. Tammany Parish. During her tenure as CEO, Lakeview Regional reached top rankings in HCA Healthcare for employee engagement, physician engagement, turnover, and clinical excellence.

Hiral is passionate about the healthcare field because it is an industry by people for people. She enjoys making a notable difference in the communities she serves through involvement with local organizations as well. She has served as board chair for the Youth Service Bureau and as a CASA volunteer working with children in the foster system.

Hiral is originally from Savannah, GA where she completed her undergraduate degree in Health Administration at Armstrong State University. She earned her Master of Health Administration from Tulane University and also has her Certification in LEAN Healthcare from University of Michigan. In addition to her involvement in healthcare organizations, Hiral enjoys traveling, spending time with her two nieces and family, and listening to live music. 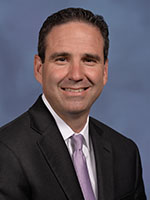 Matthew F. Cova, chief operating officer, is experienced in developing service line growth and physician alignment strategies that have consistently generated increased market share for the hospitals in which he has served. Matt joined MountainView in April 2017 as the hospital’s chief financial officer, and was appointed COO in June 2021.

Matt has demonstrated successful financial and operational results for hospitals and physician practices and was named one of Vegas INC’s 40 Under 40 for 2019. Previously to MountainView Hospital, Matt worked at the University Medical Center of Southern Nevada (UMC) where he created, implemented and oversaw the business development and strategic planning functions of the hospital.

Matt holds a Business Administration degree, with minors in Accounting and Political Science, from Loyola Marymount University in California. He earned his Master’s Degree in Healthcare Administration from the University of Nevada, Las Vegas. 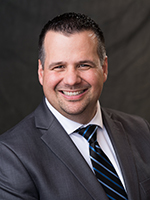 Carl H. James II, Chief Financial Officer (CFO), has over 20 years of experience in healthcare operations and finance. Carl joined HCA in April of 2019 and came to MountainView in 2021 from Regional Medical Center in San Jose.

Prior to joining HCA, Carl served as Vice President and Chief Financial Officer for O’Connor Hospital and St. Louise Regional Hospital, a part of Verity Health System. Prior to that, Carl served in several capacities with Community Health Systems, including Regional Director and Controller.

In each of his positions, Carl had the opportunity to work with teams to standardize systems, support growth initiatives and improve efficiencies in order to improve healthcare delivery for patients. 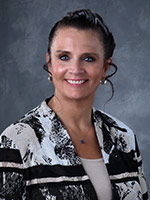 Prior to joining MountainView, Ruth was at HCA Healthcare’s Tulane Health System, where she has served as the Chief Nursing Officer since 2019. Ruth is a seasoned executive serving in roles of increasing responsibility throughout her career.

At Tulane Health System, Ruth helped navigate the complex and challenging landscape of the pandemic while at the same time responding to natural disasters in the form of hurricanes that impacted the hospitals.

Ruth began her nursing career at the bedside in obstetrics. Additionally she has worked in newborn services, emergency services and as a travel nurse. Dr. Martinello joined MountainView Hospital in 2021 from Southern Hills Hospital where he has been the CMO since April 2020. He is a Board-Certified Emergency Physician with experience in trauma life support and also a certified professional of healthcare quality. His expertise is in emergency medicine, of which he has more than 11 years’ experience. Dr. Martinello has also served in various positions throughout his medical career, including Vice President of Medical Staff and EMS Medical Director.

Before joining HCA Healthcare, Dr. Martinello was a partner and owner of the Greater Newburyport Emergency Physicians. In this role he oversaw business operations, the corporate budget and managed physicians and staff.

Dr. Martinello earned his Doctor of Medicine from the University of Nevada Medical School of Medicine in Reno. During his residency, he became the Chief Resident for Emergency Medicine at the Maimonides Medical Center and was name Resuscitation Resident of the Year. Dr. Martinello also has his Master’s in Business Administration from UMASS Amherst School of Management.

Beyond serving the community, Dr. Martinello served the country as well. He was an infantry soldier with the Massachusetts National Guard and was also a combat medic for the Nevada National Guard. 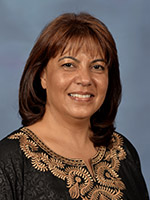 Harsha Dave is vice president of quality/risk and is dedicated in providing quality, patient and family-centered care in hospital settings. She is committed to clinical excellence and a philosophy of “the Patient comes first.”

Before becoming Vice President of Quality/Risk management, Harsha spent four years as a director of infection prevention & control in which she helped restructure the Infection Prevention program that has resulted in a decrease in hospital acquired infections and increased patient satisfaction. Prior to this, Harsha spent 10 years as an infection preventionist interacting with front line staff and educating them on the importance of preventing infections.

Harsha grew up in Uganda, East Africa, and lived in London with her family prior to moving to United States to build her career. She has a wide variety of experience from working at a children’s hospital in Atlanta, to owning a hospitality business in Arizona.

Harsha enjoys spending time with her husband and daughter. 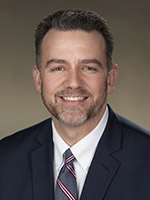 Chris Marlin, vice president of human resources, has been with MountainView Hospital since August 2020. Chris has more than 23 years of experience in human resources management roles within HCA.

Chris focuses on the overall strategic human capital of the organization and has a proven track record of low turnover and high employee engagement in the facilities he has been in. Chris has a BA in Human Resources Administration, and an MBA from St. Leo University in Tampa, Florida.

Prior to Las Vegas, Chris resided in Denver, Colorado and Roanoke, Virginia, but most of his family calls Florida home. Chris is married to his wife, Seglinda, an ARNP, and in his spare time, enjoys Jeeping, traveling, and taking care of his greyhounds and a parrot. 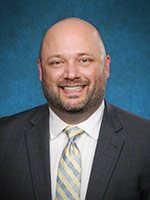 Brandon began his career in healthcare with Community Health Systems at Cedar Park Regional Medical Center in Cedar Park, TX. He started as a Patient Financial Counselor and received promotions to Supervisor, Manager and subsequently the role of Patient Access Director before moving into Administration. His first role in Operational Leadership was as an Assistant Administrator for Community Health Systems at Northwest Healthcare in Tucson, AZ. Before arriving at MountainView, Brandon was an Associate Administrator for Alta Hospitals System at Foothill Regional Medical Center in Orange County, CA. 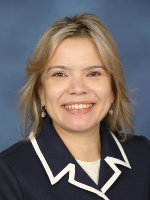 Julia has her bachelor’s degree in accounting from the University of Central Florida, and an MBA with a concentration in project management from Keller School of Management.

Julia is married to her husband and has one furry child, their beloved Weimaraner. In her leisure time, Julia enjoys remodeling projects and outdoor activities. 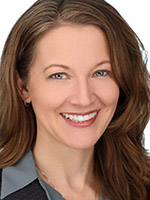 Jennifer McDonnell has been with MountainView Hospital since November 2012. She is an experienced and award-winning communications executive with experience in developing major initiatives, media relations, crisis communications and community events.

Jennifer was named to Vegas Inc.’s 40 under 40 in 2018 and has received several awards for marketing and communications, including the Aster Award and PRSA Pinnacle Award. Prior to her career in healthcare communications, Jennifer was a journalist, reporting on business, real estate and legal matters. 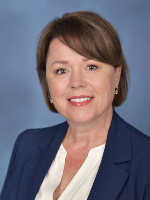 Prior to joining the MountainView family, Michelle was Director of Women’s and Children’s Services at Sunrise Hospital & Medical Center/Sunrise Children’s Hospital. During her 20 year tenure at Sunrise Hospital & Medical Center/Sunrise Children’s Hospital she served in a number of leadership roles each with increased administrative responsibilities. From Director of Patient Services for the adult units, Director of Pediatrics, and Administrative Director of Pediatrics, which included oversight of Neonatal ICU, Pediatric ICU and Pediatrics. Michelle started her nursing career 27 years ago in Canada and continues thrive on the privilege to work in a career that allows her to improve the quality, safety and health of others.

She earned her Master’s degree in Nursing with a focus on leadership and her undergraduate degree from Grand Canyon University, Phoenix, Arizona. She received her nursing diploma from the College of New Caledonia, Prince George, British Columbia. Michelle’s pride and joy are her two sons.