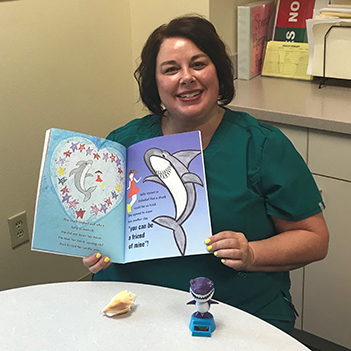 It is clear when someone has found their calling in life. The evidence can be seen in their work, their homelife and in their relationships. The same can be said of Deborah Buckreis, whose passion for her work has led her to publish a book using her knowledge in speech language pathology.

Before coming to work at MountainView Hospital, Deborah worked for the local school district for 12 years as a Speech Language Pathologist, while at the same time working on the medical side for speech language pathology. During her time working with children, Deborah strived to make therapy fun, as kids learned to form sounds.

She enjoys her work, but she was inspired by her loving grandfather to take it even further.

“My grandfather is my inspiration for everything,” Deborah said.

Getting the push she needed from him, she was able to combine her love for children and speech language pathology into a book titled “Sally Swenson’s Wonderful Day at the Sea.” The story follows a little girl named Sally Swenson as she goes on a fun beach adventure! Deborah expertly designed the book to assist young readers with pronunciation of the letter “S” and its many uses – something many of her young students struggled with.

But she is not stopping here. She plans to publish more books that will provide a wide spectrum of assist to those who struggle with speech in various areas. Deborah’s passion for her work has led her to not only enjoy what she does, but also to add to her career field in a way that not many others would.

Deborah said it’s never too late to pursue your passion. “It’s never too late! Go on the internet. There is so much information out there to help writers publish on their own or find companies to help them. Do your research.”

Deborah also shared that her second book in the four-book series will be out fall 2021!

Deborah’s accomplishments in her field are an inspiration to speech language pathologists and writers, alike.

Heart problems after COVID-19: what we know now

Some individuals who were diagnosed with COVID-19 may be experiencing heart problems.

Choosing the best OBGYN and hospital for you

Finding the best OBGYN and hospital for each expectant mother is a very personal experience.

Using an air purifier for allergies, asthma and other health concerns

5 myths about back pain