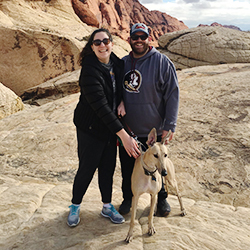 It has been a long trip already. Sixteen hours from Tallahassee, FL to Dallas, Texas on a bus, performing in Cowboys stadium as Florida State University opened their season against Oklahoma State University at the annual Cowboy Classic football game.  It would then be another 16 hour bus ride home.

Florida State had won the game (37-31) and the marching band was still riding high. Derrick, a tuba player, sat down in one of the last empty seats on the bus for the long ride home, directly behind a woman named Lauren, a clarinetist he hadn’t spoken to before. He didn’t know in that moment his life would change forever.

“At a rest stop in Louisiana, Derrick struck up a conversation and the rest is history,” Lauren recalled about the 2014 bus ride.

Fast forward six years and the couple tied the knot Jan. 25, 2020 just before COVID shut down the world. They weren’t able to have a honeymoon, but they did have a “mini moon,” spending some time at Disney World before returning home to Las Vegas, Nevada.

The pair got on like any new couple during the start of the pandemic, went to work, came home. Advanced in their careers. Took in Netflix.

Near the end of 2020, Derrick transferred from Southern Hills to MountainView Hospital and was promoted to Associate Administrator. Lauren was promoted to a business partner at Sunrise. Despite the hardships of working through the pandemic, things were looking good for the young couple, who recently adopted some rescue dogs.

In the background though, Derrick hadn’t been feeling great. While at Southern Hills colleagues noticed Derrick moved slowly and would complain about aches and pains a 26-year-old shouldn’t have. Derrick finally took the time to get some checkups, and was diagnosed with rheumatoid arthritis. He was on medication, but it gave him terrible migraines. In consultation with his physician, Derrick stopped the medications and had to wait to start new ones. During that time, Derrick noticed the joint pain come back quickly.

Derrick reported to work at MountainView one day in April 2021 and had a massive nose bleed that sent him to the ER. Staff joked with him good naturedly and made sure he was taken care of. Two days later, while at home, Derrick began coughing up blood.

“I thought then I probably should go to the hospital,” Derrick said. “Initially, I thought it was residual from the nose bleed, but no, I was coughing up lots of blood.”

At MountainView, the team sprung to action. X-rays of Derricks lungs looked like broken glass, similar to what was typically seen with severe cases of COVID, however all COVID tests came back negative. The largest surprise from his initial evaluation came back in his bloodwork-a creatinine level of 10. Creatinine is a measure commonly used to monitor kidney function and a healthy result would be a creatinine level between 0.74 and 1.35.

Derrick was admitted and later upgraded to ICU. His kidneys had shut down. Additional testing was done and it was discovered that Derrick had an undiagnosed, rare autoimmune disorder, GPA (Granulomatosis with Polyangiitis), which affects his vascular system, lungs and kidneys.

Derrick was put on 1,000 mg of prednisone, which cleared up his lungs and breathing, but his kidneys were still not responding. Derrick underwent a kidney biopsy, which resulted in some terrible news.

“They said the damage was permanent. I had about 10 percent kidney function,” Derrick said.

The physician who cared for Derrick, Dr. Vincent Yang, nephrologist and Vice President of the MountainView Medical staff was the one who had to break the news to his young patient.

“I think when I see a lot of patients, there are two ways they can take the news; one, they can be down on themselves, or the opposite, which is what Derrick did with great family support,” Dr. Yang said.

During this entire time, Lauren stayed by Derick’s side as much as she could, and Derrick’s parents flew out – not knowing what the outcome might be.

“When I heard that A, Derrick had this illness and B, that his kidney damage was permanent, it was all very sudden and completely shocking,” Lauren said. “For us just to watch him process this diagnosis, knowing him as long as I have, was honestly inspiring. I always say he is the best person I know in the world and watching him take everything in stride makes me even more in awe of him.”

Derrick improved enough to be discharged, but started peritoneal dialysis treatment at home for 10 hours a day, every day. While in the hospital, he made the decision to immediately place his name on the donor list for a new kidney, knowing that it can sometimes take years to find a match.

Patients can receive a donor kidney two ways, via a living donor or non-living donor. Oftentimes the quickest way to receive a new kidney is through a live donor, but many hurdles must be met including blood type, body type and more. They must be a match.

Before Derrick was discharged, MountainView’s administrative team helped Derrick get in touch with James Pitman, Transplant Director for HCA Healthcare, along with Dr. Adam Bingham at HCA Healthcare’s Methodist Hospital Specialty and Transplant. They talked to Derrick about the process, how it worked and that it would be best to place his name on the recipient list now, if it was a path he wanted to pursue, because the wait could be long.

Immediately after hearing Derrick placed his name on the recipient list, Lauren added her name as a potential donor. She was joined by two of Derrick’s uncles and the security director at sister hospital, Southern Hills.

All the people who put their name on the list to help Derrick came back as a blood type match – including Lauren.

“I know I was supposed to be his support system, but he continued to be my rock through everything,” Lauren said. “There is nothing in the world that I wouldn’t do for him. It was a no brainer to put my name in the hat.

“At work when I got the call that I was a preliminary match I couldn’t believe it.”

Subsequent tests showed Lauren was not only a blood match, but a genetic cross match. The perfect match.

Derrick though, had other thoughts initially about his wife donating a kidney to him.

“I was scared, I didn’t want her to going through it,” he said. “But she talked me into it. I couldn’t be more grateful; it’s just hard to process. The whole thing is wild.”

Derrick said the couple’s funny, and sometimes dark sense of humor has kept them going.

“She told me its marriage insurance, I can’t return her without all of her parts,” Derrick said with a laugh.

After more pre-testing a date was set at HCA Healthcare’s Methodist Hospital for the transplant – Sept. 29, 2021, just weeks after he celebrated his 27th birthday.

The week of the transplant the couple began to pack up their car for the month that they would be spending in San Antonio, recovering and being monitored. The couple left early in the morning, embarking on yet another long drive that would take them into the next phase of their life.

“We have both been overwhelmed with love and support from our family, friends, and colleagues,” Lauren said. “I’m grateful beyond words for MountainView and how amazing they treated Derrick – and made us feel like family.”

The drive to San Antonio was as beautiful as it was uneventful, except for the fact that during their drive through El Paso, Texas they had to sing-along to Marty Robbins, an old country singer famous for his ballad about “the west Texas town of El Paso….” 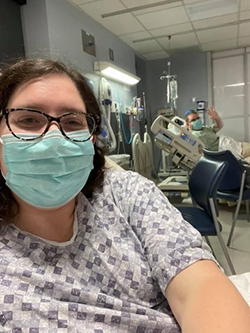 Once arriving in San Antonio, the couple settled into their rented house and prepared for the days ahead.

The day before the surgery, the couple were in pre-op most of the day, only to return the day of surgery at about 5:30 a.m.

“My dad was really nervous, ” Derrick reflected. “The craziest thing for me that morning, is that when my dad gets really nervous or serious he grabs you by the cheeks with both hands and he did that to Lauren.

“I thought ‘oh no.’ It was tough that morning, I was super nervous, so was Lauren.”

Lauren’s surgeon at Methodist, Dr. Luke Shen, said Lauren actually had the option to have her kidney to be harvested in Las Vegas, but chose to have the surgery done at HCA’s Methodist due to its reputation.

“She had the option to do the surgery in Las Vegas as there are other transplant programs there, however, she was well-aware about our reputation here at Methodist Specialty & Transplant. It was good to know that she was comforted by our program.”

And while Derrick was nervous, his surgeon, Dr. Eric Treat, said he was a well-prepared patient.

“The surgery went well and he has recovered,” Dr. Treat said.

The next thing Derrick knew, he was waking up in the ICU and as he relates, it was “smooth sailing” after that.

Derrick and Lauren were both discharged home, which for them was their rented house where they stayed for the next couple of weeks before returning to Las Vegas.

Near the end of his stay, Derrick was feeling well enough to visit some of the sites, including the famous River Walk. He even purchased a pair of dress cowboy boots.

And then, as if it has all been a (bad) dream, Derrick was back at work the week after Thanksgiving.

“I’m just looking forward to getting back to normal, no more dialysis, maybe some travel in the future,” he said. “I could not be more fortunate.”

Dr. Yang, the nephrologist who cared for Derrick at MountainView, said Derrick’s story should be one of hope for other patients going through a similar situation.

“If you take anything from his story, it’s that it doesn’t matter what life throws at you, it’s how you respond to it,” Dr. Yang said. “If you are dedicated and in a positive way, even something like severe kidney failure at a young age won’t hold you back from reaching your goals.”

March 14, 2022 by Emily Paulsen
Eating disorder awareness can make a big difference: The earlier an eating disorder is detected and treated, the better a person's chances are...
Previous Post

March 7, 2022 by Tayla Holman
Endometriosis is a common health issue for people who menstruate. It affects an estimated one in 10 people with uteruses.
Next Post
Back to blog home

Are spider veins anything to worry about?

Fighting a flu or cold as a cancer patient