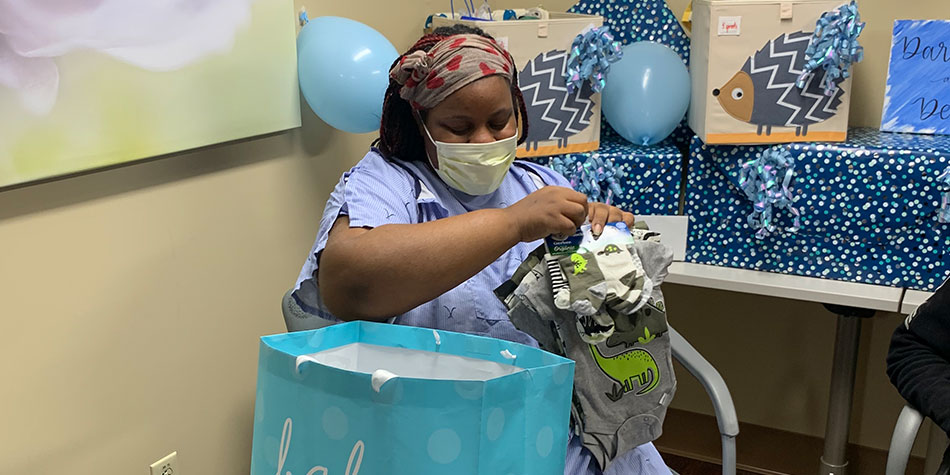 When LaJanae found out she was pregnant, like any new mom she was nervous – and excited. During an early ultrasound she found out she was not having just one baby – but two. And not only was she going to have twins, but she was having monochorionic monoamniotic twins (often called momo twins). Momo twins are identical twins who share the same amniotic sac and placenta in utero.

Having momo twins turns a “double” pregnancy into a high risk one, as complications can arise for mom and babies as the babies grow and develop. Momo twins are very rare, representing approximately one percent of identical twins and less than 0.1 percent of all pregnancies.

Many times, the mother is admitted to the hospital during the pregnancy, and placed on strict bedrest so that mom and babies can be monitored at all times.

LaJanae was admitted to MountainView Hospital on January 24, 2021 and was scheduled for a planned C-section in late March. She was allowed one 20 minute walk off her monitors per day.

During one of those recent walks, her nurses suggest they take a different hall, and led LaJanae into a conference room that had been set up as a baby shower.

“LaJanae has been with us for almost two months, and the nurses wanted to show her that we care for her; we know being here is hard, especially during COVID which has restricted visitors,” said Kathy Podorsek, Director of Women’s Services for MountainView. “We are also excited to have a mommy with momo twins. This is a very rare occurrence.”

MountainView Hospital is home to an antepartum unit that allows for high risk moms to receive specialized care during their high risk pregnancies. Often times high risk moms have to stay for days – or weeks – at a time to be monitored. MountainView also has a Level III neonatal nursery unit (NICU) in the event babies need additional care following delivery.

LaJanae said the surprise baby shower was very special and she was overwhelmed with all the gifts from the extended care team who cared for her during her long stay. LaJanae said she is excited to meet her twin boys – Denzell Jr. and Darrell, but already knows they will be a handful.

“I know they are rowdy,” she said laughing. “They like to move a lot.”

What causes sinus problems and how to find relief

Learn all about sinuses, how to find relief and prevent sinus infections and other sinus problems.

Clearing up misconceptions about the COVID-19 ...

Things a gynecologist wants you to know about endometriosis

Gas: What’s Normal and What Isn’t?

How to avoid germs throughout the day

7 signs it's time for knee or hip replacement surgery

How to heal your gut: 7 things to try